Jeanne was awesome to work with! I didn’t expect her to exceed our expectations! She was very patient, very kind and very understanding! She answered and helped us through all of our questions and our concerns and her communication is absolutely wonderful! My fiancé and I are very pleased with our purchase, we would gladly recommend using Jeanne for that special event!

We are thrilled to present Getting to Know: Invitations from Carlson Craft.  Whether you’re previewing Graduation Announcements, Wedding Invitations, Bar & Bat Mitzvah Invitations, Holiday Cards or Quinceañera invitations, you’ve most likely run across a large collection of invitations.   That’s because Carlson Craft is the largest producer and supplier of social stationery products in the world!

The business blossomed within six months into a full-time retail service. By 1962,  they employed 50 staffers and a variety of Carlson Craft social stationery was available for sale in 26 states. 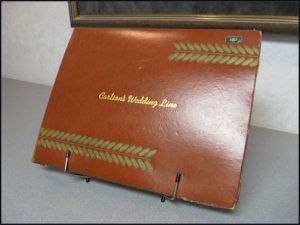 Invitations4Less.com is proud to have been a dealer for Carlson Craft for more than 20 years.  We are happy to assist you with placing an order for any Carlson Craft item your special day calls for.